While BlackRock is the leader in ETFs, the US sector and industry ETF sub-category is dominated by State Street Global Advisors. BlackRock manages 35% of all listed ETF assets in the United States as of September 17, according to ETF data from CFRA, ahead of Vanguard (29%) and State Street Global Advisors (15%), but there are some approaches to investment where peers have a head start. For example, State Street holds 44% of the sector and industry ETF market in the United States, major peers Vanguard (26%) and BlackRock (15%) as well as other providers such as Fidelity, First Trust and Invesco. Sector and sector ETFs are generally weighted according to market capitalization, while providing investors with diversification within a sector such as financials or information technology rather than owning only a few stocks.

Figure 1: Market share of listed ETFs in the United States (% of assets)

Sector ETFs may look the same, but they don’t perform the same. For example, Vanguard Financials ETFs (VFH) rose 57.5% in the 12-month period ended September 17, slightly ahead of the 54.9% gain for SPDR Financial Sector ETF (XLF) and significantly stronger than the gain of 44.3% for iShares US Financials (IYF). While VFH has the lowest expense ratio of the trio (0.10% vs. 0.12% for XLF and 0.42% for IYF), costs are not the main driver of the performance gap, unlike to ETF assets. 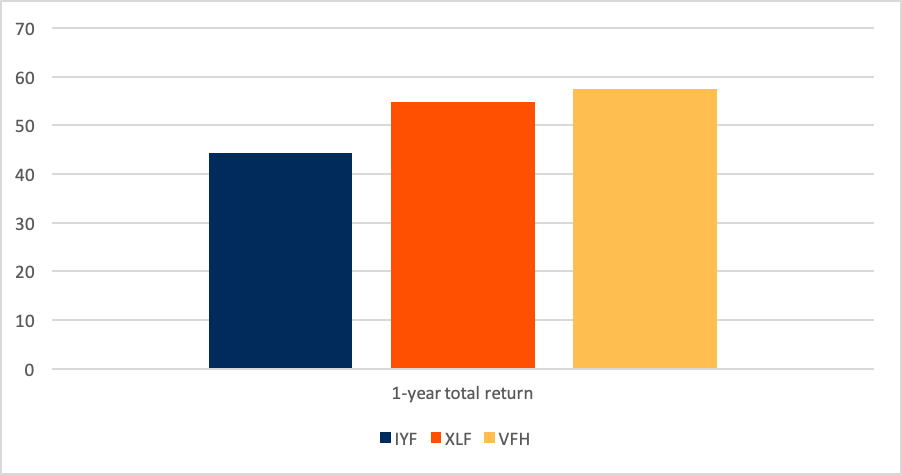 XLF only owns financial sector stocks in the S&P 500 Index, while VFH owns small and mid-cap financial stocks that are not part of the large-cap index, such as Cowen and Janus Henderson Group. However, the IYF has historically been built quite differently. Before BlackRock changed the underlying IYF benchmark at the end of last week, IYF held a 20% stake in real estate companies such as American Tower and Prologis as well as exposure to JPMorgan and Wells Fargo. Real estate stocks have historically provided more defensive characteristics than financials and have rebounded less during market recoveries.

The IYF now follows the The Russell 1000 Financials 40 Act 15 / 22.5 Daily Capped Index, which unlike the Dow Jones US Financials Capped Index, excludes real estate companies, so REITs are no longer in it. Going forward, we expect IYF to perform more in line with its XLF and VFH peers, but this example shows why investors should not rely solely on past performance, as holdings can and do change within ‘an index ETF.

Despite its recent change of benchmark, IShares US Technology ETF (IYW) always looks different from his peers. Many investors still view Alphabet and Facebook as information technology stocks, as did Apple and Microsoft years after they were transferred to the communications services industry under GICS and sold. Select Sector SPDR Technology (XLK) and Vanguard Information Technology ETF (VGT). These investors will be happy to still find the four companies within IYF, representing almost 50% of the assets, although BlackRock also went from a Dow Jones sector benchmark to a Russell last week for IYW.

In the one-year period ended September 17, 2021, IYW grew 46% ahead of gains of 40% and 38% for VGT and XLK despite a higher expense ratio. Exposure to mega-cap communications services companies, as ranked using the GICS framework, helped push IYW â€‹â€‹up. Like VFH, VGT owns shares not held in peer ETFs such as Cloudera and Square.

Many investors will choose the cheapest or best performing ETF in an investment style, believing that what is inside is basically the same. However, the sector ETFs of the three largest US ETF providers have historically been quite different. Even though BlackRock is changing the benchmark provider for some of its ETFs, the content of its ETFs is not the same as that of its peers. CFRA’s forward-looking assessments of ETFs combine analysis of fund costs, past performance and proprietary holdings analysis to help investors with ETF research understand the risk and reward distinctions between similar funds.